Gen. Ray Odierno speaks to a soldier about the Army Ranger Training Brigade during a visit to Ft. Benning, Georgia on October 23, 2014. The general visited to discuss the progress of integrating women into the Ranger School course. (U.S. Army photo/Staff Sgt. Mikki L. Sprenkle)
Last week, eight women washed out of the Army’s prestigious Ranger School after 11 others didn’t make it past the first cut, and none of them will earn the vaunted black and gold Ranger “tab.”

Yet. And that’s actually a good thing.

No, they didn’t get a chance to move on to face the grueling demands of the leadership school’s mountain phase, and for the moment, at least, they’ve paused this first experiment to open Ranger School to women for the first time.

But some headlines are declaring this a failure, which—intended or not—suggests it’s a sign that women can’t handle close-quarters combat or some of the military’s other highly demanding tests. This groundbreaking co-ed class, though, was far from a failure.

In fact, women made it past some of the physical hurdles at nearly the same rates as men. And the fact that no women candidates moved forward this time doesn’t spell the end of women tackling the Army’s toughest leadership course, which spans two months, three phases and endless physical obstacles, including sleep and food deprivation. The last eight women standing this time around will attempt the first phase of Ranger School once again on May 14 and they’ll be in good company—with 101 men who also didn’t finish this time, but earned the right to try once more.

Most importantly, what the result so far demonstrates is that the Army has stood by what Ranger School graduates and women soldiers alike have demanded: maintaining the incredibly high standard of what senior military leaders call the “Army’s most physically and mentally-demanding course” while making room for women who could handle the test and sought the chance to meet that bar. No one wanted any slack cut, and none was.

In fact, women made it past some of the physical hurdles at nearly the same rates as men.

When I went to Fort Benning in April to report on the last of the pre-Ranger School courses in which women and men prepared for the rigors of Ranger School, over and over again women soldiers involved in the opening of Ranger School told me they did not want a lowered standard. In fact, they were fine if only one woman finished the course this time. Or none. They felt confident that eventually women would make it through if given the chance. And now, they said, for the first time ever, women soldiers knew the standard from first-hand experience, so that the fittest and most committed could train to it with the knowledge that they could enter and potentially graduate from Ranger School.

And the women aren’t all that different from the men, many of whom didn’t make it on their first try at Ranger School or didn’t make it past the first set of exercises.

Indeed, when women started the opening phase of Ranger School for the first time in April, alongside them were 71 men who had already entered the course, hadn’t made it through, and had the strength, guts and determination to return to try once more. More than a third of all soldiers who finish Ranger School “recycle” through at least one of the phases, so the women who didn’t make it to the end this time are in solid statistical company. About 35 men who started alongside these women won’t receive the chance to start again. Instead, they will return to their units now without having another shot.

The reality is that eight of the 19 women who began Ranger School on April 20 have already met some of the course’s most intense physical demands. They made it through the muscle-crushing first four days, known as Ranger Assessment Phase, in which soldiers confront a series of tests, from swimming, push-ups and sit-ups to land navigation and finishing a 12-mile march with 35 pounds on their backs in less than three hours. “As many as 60 percent” of all Ranger School dropouts occur in these first four days. Nineteen women and 381 men began Ranger School last month and at the finish of those initial 96 hours, eight women and 184 men remained—meaning just 42 percent of all women and 48 percent of men succeeded in passing those first days.

So it’s not a case of “oh, well, we tried.” It’s more like “if at first you don’t succeed, try, try again.” As so many men already have and many women hope to.

“All women won’t be able to do it, your average female won’t be able to handle Ranger School, but women that train, that are in great shape, not just good shape, they will have a good chance at completing Ranger School,” said Sgt. 1st Class Tiffany Myrick, a military police non-commissioned officer now serving as an observer and adviser at Ranger School. Senior officers note that most men couldn’t handle it, either. Not even 4 percent of the Army has earned the designation.

“The women made it through RAP week, which is the one that put the most people out of Ranger School,” said Myrick. “It is tough, but it is definitely doable.”

If the Army had offered different standards for the women who wanted to face its toughest test—and if women completed Ranger School under that different standard—it would’ve been that much harder for women to prove they’re up to the challenge, or that they truly deserve to wear the Ranger tab. A single standard and the chance to meet it while doing something meaningful on America’s behalf is all these soldiers, who happen to be women, seek. 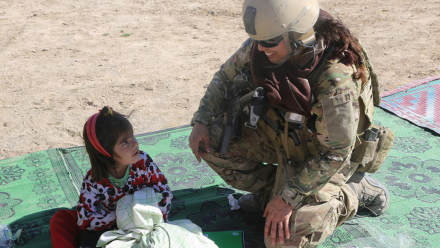