In the early hours of a fall pre-dawn night, Lt. Treadmont — an Army intelligence officer who’d also deployed to Bosnia years earlier as a 19-year-old enlisted soldier — clambered up a mountain in eastern Afghanistan, part of a platoon crossing a dense grove of trees that blocked nearly all moonlight. The Afghan terrain typically resembled a moonscape, but tonight the sightline was obscured by vegetation, complicating the night’s mission.

Eventually they reached a tiny village where the men of 75th Ranger Regiment were at work seeking the weapons and insurgent who was the target of their mission. The Rangers’ translator summoned the men of one house to come out, and in a matter of minutes the soldiers queried them in hopes of identifying the man they wanted and locating the weapons they suspected.

Then Treadmont heard the Rangers’ call over the radio. “CST, get over here.”

On arrival, the lieutenant removed her helmet to reveal long hair, tied back in two braids, and show that beneath all the gear — night vision devices, M4 assault rifle and M9 pistol — she was a woman: Amber Treadmont (whose name has been changed here and in my book, “Ashley’s War: The Untold Story of a Team of Women Soldiers on the Special Ops Battlefield,” to protect her identity). Her Cultural Support Team, or “CST,” an innocuous name for a groundbreaking concept, was born of a battlefield imperative — gathering intelligence from Afghanistan’s women.

CSTs weren’t only out there winning “hearts and minds” in the traditional sense. They were on nighttime combat operations, learning what Afghan women knew about what was happening in their communities and keeping them separated from the work Rangers were charged with doing nearby. Their work in Afghanistan is an example, not only of the CST members’ front-line courage, but of one of the mission-critical ways forward for our nation’s ongoing and, perhaps, future Central Asian and Middle Eastern wars: reaching 50 percent of the citizens — women and girls — in a given town or city as part of America’s efforts.

Under Afghanistan’s conservative culture, women are frequently viewed as vessels of family honor, and in many instances live separate from men who are unrelated by blood or marriage. Violating this tradition would cause grave offense and alienate the same Afghans the United States was and is so eager to win over. Beginning in 2009, U.S. forces would begin to formally deploy American women to engage half its Afghan constituency. And that reality translated into more opportunities opening up to American servicewomen who wanted to be part of a mission that mattered at the heart of the battle.

As CSTs became a trusted component of these overall operations, some team members took on additional roles and others received commendations for helping to find critical intelligence that would otherwise have gone unfound. CST soldiers were recruited both because they were women and they were able to keep pace on combat operations alongside some of America’s most tested fighters.

Treadmont and her teammates carried out their assignment for special operations every night and, in the process, CST became the name to which they answered and the family to which they belonged.

Tens of thousands of women have forward-deployed since 9/11—many logging multiple tours. More than 160 women (pdf) have died serving their country in Afghanistan and Iraq. Women now serve as artillery officers, intelligence officers, combat pilots and, as I learned in the reporting of “Ashley’s War,” in specific roles within Special Forces.

Along the way, the men who run our military realized that they would never kill their way to the fight’s end. And they recruited women to help fill the security gaps they saw. But even as our conversations about women in war still frequently seem to focus on what jobs women are capable of doing or should be allowed to do, there’s been insufficient recognition of what women have already done.

For years, military leaders have put the personnel they need into the roles they required, regardless of restrictions on women’s service to the United States, dating back to 1948’s Women’s Armed Services Integration Act. A decade ago, military leaders began putting women service-members alongside men on the constantly shape-shifting battlefield that was Iraq and, later, Afghanistan. First came the Marines’ “Lioness” program in Iraq that took women from all kinds of specialties out of their previous assignments and put them on house-to-house missions and patrol checkpoints, searching women to make certain they weren’t concealing weapons or explosives. Then came the Female Engagement Teams in Afghanistan created to meet and listen to Afghan women and gather information about the communities in which NATO troops were operating. Their effectiveness won attention and support among top military brass and within the Afghan government, which sought to replicate the program among its own female forces.

The special operations community built on the idea and made it their own with the 2010 creation of the Cultural Support Teams, the brainchild of Adm. Eric Olson, the Navy SEAL then leading U.S. Special Operations Command. Army special operations recruited and trained women, first from within special operations and then from across the Army, National Guard and Reserves, to deploy alongside Green Berets on Village Stability Operations—then a central part of counterinsurgency efforts — and go out at night on special ops missions with the ground-pounders of Ranger Regiment.

In 2011, the 20 women who became part of Ranger and other special operations “direct action” missions soon joined the kinds of combat operations undertaken by only a small fraction of service-members, regardless of gender. Night after night they served alongside Rangers as well as other elite teams and, as women, were able to speak to and gather information from Afghan women who had previously remained mostly out of reach.

And with each interaction, CSTs demonstrated to Afghan women that the American presence in their country offered more than just an ongoing fight.

In 2013, Defense Secretary Leon Panetta lifted the ban on women in ground combat. A few months later when the question arose as to whether women would be allowed to become Rangers and SEALs in their own right, special operations leaders cited the example of the Cultural Support Teams. “Quite frankly, I was encouraged by just the physical performance of some of the young girls that aspire to go into the cultural support teams,” Maj. Gen. Bennet Sacolick of Special Operations Command said in a June 2013 Pentagon news conference about the opening of combat roles to women. “They very well may provide a foundation for ultimate integration.”

As a 2012 citation from Ranger Regiment leaders to one of Treadmont’s teammates read, she “displayed initiative and unequaled competence” by finding the weapons the Rangers sought on that night’s operation. “Her actions ultimately led to the mission’s success.”

By July of this year, Special Operations Command will offer its recommendation to the secretary of defense on which positions now closed to women will open. A Rand Corp. study commissioned by the Special Operations Command to identify and assess possible barriers to integration is due out in coming months. By January 2016 all jobs across the U.S. military must open to women unless commanders provide an explanation provided to the secretary of defense and chairman of the joint chiefs as to why they will remain shut. Doubtless the experiences this past decade of war are playing a part in the discussion of the shape of the future force.

More significant, perhaps, is the recognition— as Olson and other leaders describe, that America wasn’t and isn’t going to kill its way to the end of its post-9/11 wars. No matter how good our military becomes at targeting insurgents and launching counter-terror missions, understanding, and building trust with, the citizens of the countries in which they’re fighting is essential. And we’ve learned that we can’t do that without our women service-members.

It’s not the military’s version of “women’s work.” It’s about how, going forward, we’ll fight wars and who is needed for the mission.

In future conflicts with impossible-to-define front lines, fighting enemies with neither uniforms nor an internationally recognized state, that need is and will remain urgent. And the CST experience illustrates not only what women contribute to some of the most dangerous combat operations, but also the unique skills women bring to the kind of ground-level problem-solving and information-gathering the battlefield requires. This capability shouldn’t end when the war in Afghanistan does. 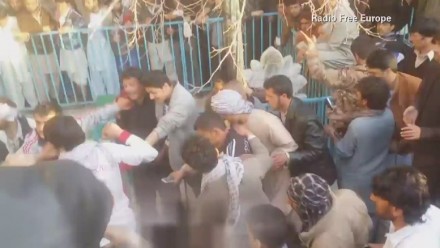