Fox News Opinion: Flags of our daughters: Honoring the women warriors who serve our country

“Make no mistake about it. These women are warriors.”

The man who shared these words was among the most tested special operations leaders of the post-9/11 wars, Lt. Gen. John Mulholland. And he was speaking of Ashley White-Stumpf and her sisters-in-arms who were part of an all-women team recruited, trained and deployed to serve alongside special operations on the battlefield in Afghanistan in 2011 while the combat ban remained very much in place.

Battlefield necessity drove the creation and then the recruitment of this all-star band of sisters –women who met as teammates, became friends and ended their deployment as family.

This group of 55 women – 20 of whom served alongside Army Rangers and Navy SEALs and other special operations teams on nighttime combat operations — went to war as part of Cultural Support Team 2 after answering the call to serve issued by a U.S. Army Special Operations Command recruiting poster urging “Female Soldiers. Become A Part of History.”

For these young women all they had ever wanted was a chance to serve a cause greater than themselves. To complete a mission that mattered. To work with the best of the best and to test their limits on America’s behalf.

These new teams for which only the best would be selected would put women on special operations missions to help U.S. forces could do something that men alone could not in this conservative, traditional country: talk with Afghan women. The idea was for servicewomen to fill the security gap that the strict separation of the sexes so frequently seen in Afghanistan created, and to allow U.S. and Afghan forces to access people and places and information that had previously been out of reach.

The wars America is fighting are changing. And so are the people recruited to serve on their front lines.

The women who answered that call to “become part of history” — serving from Alabama to Alaska and many points in between – raised their hands not to prove a point, but to serve with purpose. Patriotism, not politics, motivated them to go out each night on their nation’s behalf alongside Rangers and SEALs, some of whom were then on their 10th, 11th, 12th deployment in America’s post-9/11 wars.

For these young women all they had ever wanted was a chance to serve a cause greater than themselves. To complete a mission that mattered. To work with the best of the best and to test their limits on America’s behalf. From Kate, a West Pointer who played high school football to Amber, an intel officer who served in Bosnia and had once helped the FBI bust drug gangs to Ashley White, a Kent State grad married to her ROTC sweetheart who loved to cook and bake and loved to ruck march for miles and bust out 25 or 30 pull-ups from a dead hang.

As we pause to celebrate America’s foundations and to remember those who fought valiantly for the nation’s independence, let us also take a moment to celebrate the future force ready to defend the nation come what may. And that force is, increasingly, filled with women like Ashley White and her teammates.

In the Gulf War of 1991 more than 40,000 women went to war for the U.S. By this last decade’s conflicts in Afghanistan and Iraq, that number had climbed more than seven-fold to close to 300,000.

Today women account for roughly 15 percent of the active-duty military. By January 1, 2016 all combat roles will open to women or a reason given as to why they will not. A whole slew of jobs across the services already have opened. And the Air Force Academy’s incoming class is 30 percent female. As Chairman Dempsey said recently in the 2015 National Military Strategy, “critical to building the best military possible are our efforts to further integrate women across the force by providing them greater opportunities for service.”

Women have broken ground on America’s behalf this past decade of war in ways that we are only now, as a nation, starting to recognize. From recipients of the Silver Star, Purple Heart and the Distinguished Flying Cross, to women in uniform flying (history-making all-women) combat missions in Afghanistan and leading military police squads, they have been out there on the front lines asking their nation how they can best use their skills and talents and desire to serve.

Lt. Ashley White and her band of sisters trained, recruited and deployed as a team are just one part of this next greatest generation, young Americans lining up to put America first and to contribute to a cause greater than themselves. In the process these women are redefining how we see our heroes. And on this Independence Day their service merits a moment in our memory. 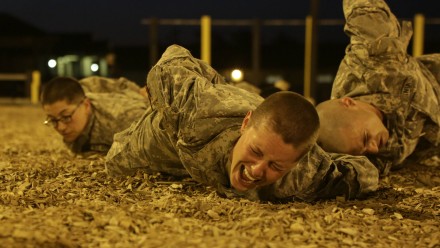