When Kakenya Ntaiya was a 7–year–old schoolgirl in Kenya, she worried that her family would soon marry her off and she would be forced to become a child raising children. She had good reason to worry: Her family had announced her engagement at age 5.

After sixth grade, Ntaiya’s best friend did marry and drop out of school, joining the estimated one in nine girls that the U.N. projects will wed before they reach 15. Before age 18, an estimated one–third of girls in developing countries will become brides. If current trends continue, in the next decade more than 140 million girls around the world will be married before their 18th birthdays—the minimum age for marriage defined in various international treaties.

Ntaiya beat those odds with help from a supportive mother and her own determination to stay in school. She even agreed to undergo the local discriminatory tradition of female genital cutting in exchange for being allowed to finish high school. With help from village elders, she earned the right and the funds to keep studying, promising she would make her community proud.

“What marriage does to the kids is it really destroys their future, it destroys their hopes, it just turns them into something they are not supposed to be,” Ntaiya says. “I wanted to see a different future for them, [and] school was the place I could achieve that.”

“When I see the girls now… and see how far we have come together—they want to be doctors, they have dreams, and they actually know dreams they can achieve — that is a joy for me.”

A mix of financial pressures and social and tradition–related practices that discriminate against women and girls leads parents to marry off their daughters so young. Many believe that finding a husband for a daughter will keep her safe, especially in times of social instability or fragility. Parents see girls as economic burdens who will not help support them in old age but whose labor will benefit the new husband’s family.

Natural disasters, armed conflict and social upheaval create more opportunities for the social ill of child marriage to take hold. Among the perils unleashed by such upheaval are food shortages, intermittent or entirely absent legal authorities, and shuttered or only occasionally functioning schools. Families looking for a path to protect their girls view marriage as one of the most acceptable options, given all the risks—including sexual violence—facing their children. A 2013 World Vision report noted that “fear of rape and sexual violence, of unwanted premarital pregnancies, of family shame and dishonor, of homelessness and hunger or starvation were all reported by parents and children as legitimate reasons for early marriage.”

Even when there are laws banning the practice, they often go ignored and unenforced. In rural northern India, government workers are said to have faced attacks for attempting to stop child marriages. But in the last decade, the fight against child marriage has worked its way to the center of the global development discussion. Or at least closer to the center.

The world has begun characterizing child marriage as a human–rights violation. In 2012, on the first International Day of the Girl Child, the U.N. called on leaders at local, regional and international levels to end the practice. The Elders, a coalition of global leaders such as former U.N. Secretary–General Kofi Annan and former Irish president Mary Robinson, took on the issue in 2010, its members helping to found the Girls Not Brides coalition. And the African Union’s recently launched “Campaign to End  Child Marriage” begins by noting that child marriage is a “harmful practice which severely affects the rights of a child.”

In Kakenya Ntaiya’s view, ending child marriage requires coming out from behind the curtains of culture and tradition. “We educate, educate, educate, because the more information you give, the more people will start questioning what we call ‘culture,’” she says.

After her own high school education, she went on to study in the U.S. and earned a doctorate in education from the University of Pittsburgh. But then she returned to Kenya to fight on behalf of other girls desperate to avoid early marriage and achieve their potential. Her Kakenya Center for Excellence in Enoosaen is home to more than 150 girls.

“When I see the girls now… and see how far we have come together—they want to be doctors, they have dreams, and they actually know dreams they can achieve — that is a joy for me,” she says. 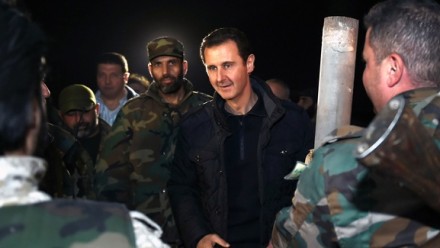 Defense One: The End of “Assad Must Go”?