Defense One: The Search for the Plan To Destroy ISIS

The United States has promised that America will “degrade and destroy” ISIS in a “targeted, relentless counterterrorism campaign.” But two and a half months in, ISIS’s appeal shows little sign of waning. And the question is, even if the U.S. is able to kill the elusive architect of ISIS’s ascent, Abu Bakr al–Baghdadi, can America kill the idea propelling his organization’s appeal?

“You have to see ISIS as fundamentally a state–building enterprise,” says David Kilcullen, former special advisor to the Secretary of State and senior advisor to retired Gen. David Petraeus in Iraq, as well as author of a 2010 book on counterinsurgency. “These guys are trying to build a state.”

To date the U.S. has delivered a three–month campaign of air strikes in Iraq and Syria. Earlier this month the Pentagon announced that 1,500 more American troops would head to Iraq to advise and assist Iraqi and Kurdish forces now facing off against ISIS. The Obama administration has announced a plan to get $500 million in additional weapons, training and resources to more moderate Syrian fighters, the “boots on the ground” now fighting both the Islamic State, also called ISIS or ISIL, and the government of Bashar al–Assad in Syria. But that training and equipping has yet to begin. And that, say those close to the more moderate Syrian fighters, is part of the problem.

Several people inside and outside the administration tell Defense One that moderate Syrian rebel forces feel let down by the West, which has yet to articulate a coherent strategy or match resources to their rhetoric when it comes to supporting Syrian moderates. That lack of resources, they say, has increased ISIS’s appeal as the blood–soaked Syrian civil war grinds on into a stalemate.

“ISIS is offering salaries to young men and it is providing protection because the choice is either you fight ISIS or you join them; on top of that you are getting weapons, ammo and a piece of war booty,” said one administration official.  “For Syrian fighters the immediate reason to join begins with at least the rumor of consistent salaries.”

(Related: Stop Fearing Iran and Back the Free Syrian Army)

“There are tens of thousands who would be willing to fight as long as there was support,” said the official.

Those supporting Syria’s anti–ISIS, more moderate rebels agree, pointing to a mismatch in ambitions and resources. “ISIS is all in, but the American strategy is not all–in when it comes to fighting ISIS in Syria,” says Oubai Shahbandar, adviser to the Syrian Opposition Coalition and former Pentagon analyst. “The alternatives to ISIS are not sufficiently resourced to provide both service delivery, salary payments and ultimately to have the necessary military resources to defeat ISIS and that sends a strong message to the local populace.”

ISIS is offering salaries to young men and it is providing protection because the choice is either you fight ISIS or you join them.

And yet the Obama administration seems to have never fully gotten behind the idea of training Syrian moderates or nationalists, unable to get around significant concerns about vetting and the fate of any U.S.–supplied weapons being turned on Americans.

President Obama told the New York Times in August that “the idea that we could provide some light arms or even more sophisticated arms to what was essentially an opposition made up of former doctors, farmers, pharmacists and so forth, and that they were going to be able to battle not only a well–armed state but also a well–armed state backed by Russia, backed by Iran, a battle–hardened Hezbollah, that was never in the cards.”  It “has always been a fantasy,” Obama said. Only a month later Obama announced that “we will move forward with our plans, supported by bipartisan majorities in Congress, to ramp up our effort to train and equip the Syrian opposition, who are the best counterweight to ISIL and the Assad regime.”

In between those statements ISIS strengthened its military campaign in Iraq and showed a brutality that stunned even those used to al–Qaeda’s violence, beheading on camera American journalist James Foley. In the face of such ideology–powered brutality, critics say U.S. officials must be very clear–eyed about what they can and cannot achieve.

“I don’t think we fully appreciate the ideology of it,” says retired Lt. Gen. David Barno, now a senior fellow at the Center for a New American Security, arguing America is still “well behind” on understanding ISIS and its appeal. “This is much more of a long–term management and containment problem then ‘let’s find away to defeat and destroy ISIS.’ I don’t see that happening — and I don’t see that happening without a long–term commitment of American military power.”

And Barno says he doesn’t see resources as the central question.

I don’t think we fully appreciate the ideology of it.

“The Iraqi security forces, I think, were extremely well resourced and had tons of American equipment,” Barno says. “They didn’t get rolled over because they didn’t have enough money or material.”

The complex, confounding and constantly evolving series of facts on the ground is precisely why the Obama administration did not want to enter the Syria conflict and why many in the administration worried that any U.S. involvement in Syria could bring more harm than help. But with the conflict showing no sign of ending any time soon, some say the U.S. has to get more serious about addressing ISIS in Syria and pushing for a political end to the conflict, one that doesn’t end with Assad still in power.  Focusing only on Iraq, they say, is not enough.

“Syria,” says Kilcullen, “…is the political problem we don’t have an answer for.” 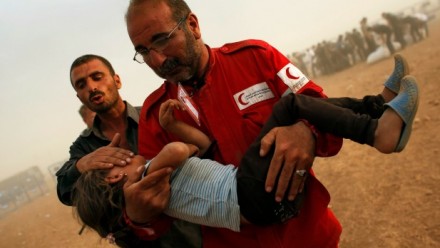